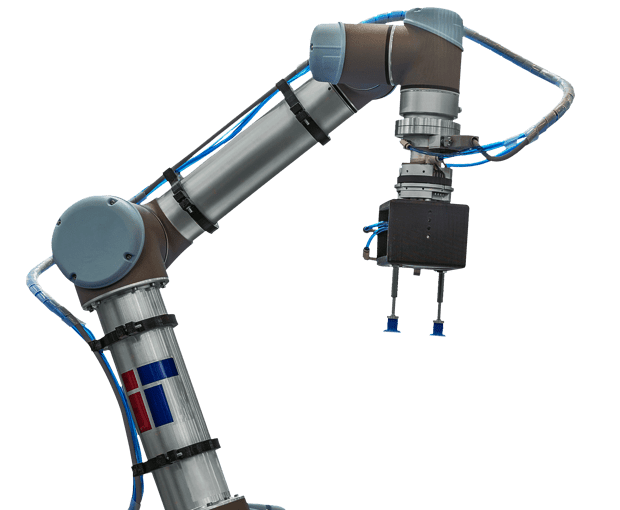 RoboMotion provides high-quality robots, systems and parts to companies of all sizes. We help customers thrive in the manufacturing industry by offering cost-effective robotic solutions and services to support their automation needs.

RoboMotion supply automated robotic solutions across a large number of industry sectors, including food, plastics, pharmaceuticals and foundry in both domestic and international markets.

The Robotic automation systems designed and built by RoboMotion include fully automated machines for high volume manufacturing and assembly and semi-automated robot solutions for medium to low volume production.

RoboMotion provides high-quality robots, systems and parts to companies of all sizes. We help customers thrive in the manufacturing industry by offering cost-effective robotic solutions and services to support their automation needs.

The company’s purpose is to help its clients improve profitability through the deployment of the latest robotic technologies that reduce operational cost and increase line efficiency.

The primary use of industrial robots is to automate applications throughout your production line to save time and money. Industrial robots reduce waste and produce higher-quality products with continuous precision. Robots can also handle the most tedious and dangerous manufacturing applications to keep your workers safe, healthy and motivated.

RoboMotion integrates new and reconditioned robot systems for a wide variety of robotic applications. Our robot integration experience and knowledge is a great asset to our customers. We want your production line to run as smoothly and efficiently as possible and can identify the best robot solution for your specific application requirements.

Each industrial robot application requires the unique end of arm tooling, specific reach and payloads, and flexibility. RoboMotion has access to a large robot inventory from all the top brand robotic companies including ABB, KUKA, FANUC, NACHI and UNIVERSAL ROBOTS that allows us to integrate an order quickly.

Our aim is to supply robotic systems which have a typical return on investment (ROI) of 9-18 months and are simple to use by unskilled staff.

Below are the most asked questions for Robotic Solutions

What are Robotic Systems?

Simply put, an industrial robotic system is a programmable, mechanical device used in place of a person to perform dangerous or repetitive tasks with a high degree of accuracy.

Because robotic systems can be programmed to perform dangerous, dirty and/or repetitive tasks with consistent precision and accuracy, industrial robots are increasingly used in a variety of industries and applications. They come in a wide range of models with the reach distance, payload capacity and the number of axes of travel (up to six) of their jointed arm being the most common distinguishing characteristics.

In both production and handling applications, a robot utilizes an end effector or end of arm tooling (EOAT) attachment to hold and manipulate either the tool performing the process of the piece upon which a process is being performed.

The robot’s actions are directed by a combination of programming software and controls. Their automated functionality allows them to operate around the clock and on weekends—as well as with hazardous materials and in challenging environments—freeing personnel to perform other tasks. Robotic technology also increases productivity and profitability while eliminating labour-intensive activities that might cause physical strain or potential injury to workers.

What is the Purpose of a Robotic System?

The term robot comes from the Czech word robota, generally translated as "forced labour." This describes the majority of robots fairly well. Most robots in the world are designed for heavy, repetitive manufacturing work. They handle tasks that are difficult, dangerous or boring to human beings.

The most common manufacturing robot is the robotic arm. A typical robotic arm is made up of seven metal segments, joined by six joints. The computer controls the robot by rotating individual step motors connected to each joint (some larger arms use hydraulics or pneumatics). Unlike ordinary motors, step motors move in exact increments. This allows the computer to move the arm very precisely, repeating exactly the same movement over and over again. The robot uses motion sensors to make sure it moves just the right amount.

An industrial robot with six joints closely resembles a human arm -- it has the equivalent of a shoulder, an elbow and a wrist. Typically, the shoulder is mounted to a stationary base structure rather than to a movable body. This type of robot has six degrees of freedom, meaning it can pivot in six different ways. A human arm, by comparison, has seven degrees of freedom.

Your arm's job is to move your hand from place to place. Similarly, the robotic arm's job is to move an end effector from place to place. You can outfit robotic arms with all sorts of end effectors, which are suited to a particular application. One common end effector is a simplified version of the hand, which can grasp and carry different objects. Robotic hands often have built-in pressure sensors that tell the computer how hard the robot is gripping a particular object. This keeps the robot from dropping or breaking whatever it's carrying. Other end effectors include blowtorches, drills and spray painters.

Industrial robots are designed to do exactly the same thing, in a controlled environment, over and over again. For example, a robot might twist the caps onto peanut butter jars coming down an assembly line. To teach a robot how to do its job, the programmer guides the arm through the motions using a handheld controller. The robot stores the exact sequence of movements in its memory, and does it, again and again, every time a new unit comes down the assembly line.

Most industrial robots work in auto assembly lines, putting cars together. Robots can do a lot of this work more efficiently than human beings because they are so precise. They always drill in the exactly the same place, and they always tighten bolts with the same amount of force, no matter how many hours they've been working. Manufacturing robots are also very important in the computer industry. It takes an incredibly precise hand to put together a tiny microchip.

What is a Robot Vision System?

The vision system enables a robot to see and identify various objects. The system provides the robot with an ability to collect the light reflected from the objects, process an image out of it and then perform the desired action. The vision system helps with these functions by using various hardware systems to accurately pick and place parts whilst also checking for defects.

Vision systems can dramatically enhance robotic capabilities. Without vision, “blind” robots are relegated to performing the same repetitive task, until programmed to do otherwise. Robots with robot vision systems have much greater flexibility and functionality because of their ability to react to variables in their environment.

Vision systems provide many benefits for robotic automation. When robots have the flexibility to automate multiple tasks, this maximizes return on investment (ROI), as lower levels of investment are required for greater levels of automation.

Vision systems can often replace manual processes and other automation equipment too. For example, vision guidance for a robot can replace the need to invest in costly fixtures, as well as the cost of loading and unloading those fixtures.

Robotic vision systems vary widely in form and function – they can be 2D or 3D, they can be embedded onto the robot or operated separately, and they come in a wide range of resolutions and imaging capabilities. Regardless, they all have the potential to provide ROI benefits and operational cost savings.

Not all robotic applications require a vision system, but some operations benefit greatly from a robotic vision system. They’re an additional automation investment, but they can help deliver great returns.

Still have a question?

Give us a call on 01746 866 711 or drop us an email at info@robomotion.co.uk
Alternatively you can request a callback below, fill out the form and we’ll be in touch as soon as possible.

We use cookies on our website to give you the most relevant experience by remembering your preferences and repeat visits. By clicking “Accept”, you consent to the use of ALL the cookies.
Cookie settingsACCEPT
Manage consent

This website uses cookies to improve your experience while you navigate through the website. Out of these, the cookies that are categorized as necessary are stored on your browser as they are essential for the working of basic functionalities of the website. We also use third-party cookies that help us analyze and understand how you use this website. These cookies will be stored in your browser only with your consent. You also have the option to opt-out of these cookies. But opting out of some of these cookies may affect your browsing experience.
Necessary Always Enabled
Necessary cookies are absolutely essential for the website to function properly. These cookies ensure basic functionalities and security features of the website, anonymously.
Functional
Functional cookies help to perform certain functionalities like sharing the content of the website on social media platforms, collect feedbacks, and other third-party features.
Performance
Performance cookies are used to understand and analyze the key performance indexes of the website which helps in delivering a better user experience for the visitors.
Analytics
Analytical cookies are used to understand how visitors interact with the website. These cookies help provide information on metrics the number of visitors, bounce rate, traffic source, etc.
Advertisement
Advertisement cookies are used to provide visitors with relevant ads and marketing campaigns. These cookies track visitors across websites and collect information to provide customized ads.
Others
Other uncategorized cookies are those that are being analyzed and have not been classified into a category as yet.
SAVE & ACCEPT